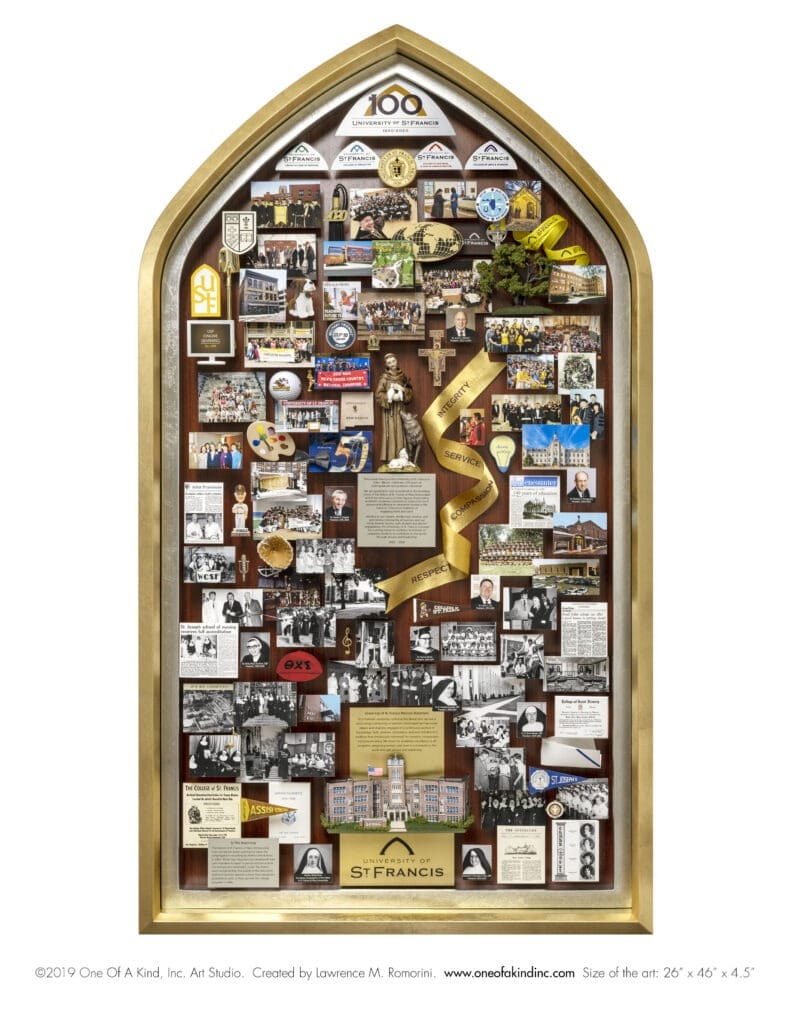 June 4, 2020, Joliet, Ill. – The University of St. Francis (USF) has added several visual reminders to commemorate its 100th Anniversary, which is being celebrated throughout 2020. The centerpiece of these visual reminders is a one-of-a-kind commemorative work of art created by artist Lawrence Romorini from One Of A Kind Art Studio in Silver Spring, MD, that is displayed in Tower Hall, adjacent to a dedication wall in honor of the university’s founding Sister Sponsors – the Sisters of Saint Francis of Mary Immaculate.

Today at 5:00 p.m. CST, University of St. Francis hosted a virtual dedication ceremony for their Centennial Collage. By visiting www.stfrancis.edu/collage, viewers around the globe watched a broadcast of the ceremony and learned more about each of the unique components included in the piece.

Appropriately named the Centennial Collage, this three-dimensional work honors the legacy of the founding Sister Sponsors and USF’s Franciscan heritage through carefully selected miniaturized photos, publications and other institutional memorabilia. The retrospective reflects USF’s values, mission and vision, while commemorating its history, leaders, innovation and accomplishments since 1920.

About the Centennial Collage

The Centennial Collage measures 46″ x 26″ x 5″, and is created of mahogany framed in gold and silver leaf. It is designed as an arch to replicate the iconic arches found throughout the campus buildings and in the university logo. A miniature statue of Saint Francis of Assisi is placed at the heart of the piece.

The story, told through the placement of items within the piece, flows from the bottom upward and includes a three-dimensional replica of Tower Hall at the base of the art and a three-dimensional miniature of USF’s iconic Three Oaks tree near the top of it. Over 100 images and three-dimensional items symbolize the growth of programs and recognize USF’s leaders over the first century.

“Over the past year, I’ve been inspired by unique opportunities USF offers its students and the diversity of its programs. The care that USF’s team invested in helping to create their 100th anniversary art is testimony to their dedication to the university and the story they are proud to share,” said Lawrence Romorini, the artist who created the piece.

The process of creating the artwork began back in August 2018 when Aubrey Knight, USF Director of Alumni and Family Relations, and Dave DiLorenzo, USF director of Community and Government Relations, were tasked with identifying and selecting items that could be used to tell the university’s 100-year story. The catch? The total number of items that could be included in the piece was capped at just over 100. Additionally, non-negotiable items such as pictures of the school’s nine presidents, along with the university’s mission statement, its core values and variations of the school’s logo counted against the target number of items. Once the parameters were established, the team worked closely with USF archivist Lorene Kennard to identify appropriate items for the piece, and also solicited items and input from the USF community, including employees, alumni and the founding Sister Sponsors.

“We wanted to make sure that this piece represented a collective storytelling effort from the USF community. Given that there was a finite number of items that could ultimately be included in the piece, incorporating a collaborative selection process helped us to make the end result a story told through as many lenses as possible to best represent our legacy,” said Knight.

Once the items were selected, they were sent to One Of A Kind Art Studio in April 2019, which is when Romorini began designing the piece. For the next four months, Romorini worked on his design and consulted Knight, DiLorenzo and Kristin Short, USF Vice President for Advancement, regarding item selection and placement before finalizing the piece. Also during that time, Knight and DiLorenzo assembled a database of images and captions for each item, which have been used to create an accompanying website that serves as a legend for the actual artwork. The finished work of art was delivered to USF in January 2020.

“It was an honor to contribute to such an important piece of USF history,” DiLorenzo said. “It allowed Aubrey and me to learn so much more about the history of USF and see it from a variety of perspectives. The artwork that resulted is beautiful and will now serve as a commemorative piece of the university’s first one hundred years.”

As she has shared sneak previews of the artwork with people at the university in advance of its public unveiling, Short said that the rave reviews she has received reflect the quality of work and effort that went into creating it.

“The University of St. Francis sincerely thanks One of a Kind Art Studio for creating a commemorative art piece in celebration of our 100 year anniversary. This art piece tells our university’s history, mission and core values in a unique and visually appealing display. The artistic detail and craftsmanship is top notch. We will display this beautiful piece of art in the heart of campus for students, faculty, staff, alumni and friends to enjoy for years to come,” Short said.

Currently celebrating 100 years of higher education rooted in Franciscan values, the University of St. Francis, in Joliet, Ill., serves close to 4,000 students nationwide and offers undergraduate, graduate, doctoral and certificate programs in the arts and sciences, business, education, nursing and social work. There are over 50,000 USF alumni across the globe.