The creation of Al Neuharth’s USA TODAY artwork was an unforgettable chapter in the One Of A Kind story. Lawrence Romorini’s very first corporate commission was for this titan of the newspaper industry, a visionary who had seen it all and had it all. It was the 5th anniversary of USA TODAY, and thanks to the vision of John Curley, Lawrence was commissioned to create a gift for Neuharth to commemorate the occasion. “Knock his socks off,” was the mandate to honor the USA TODAY Founder on the company’s anniversary.

A prominent sign “DO NOT open until John Curley is present” didn’t stop Neuharth from unveiling the collage at 7:00 a.m. on September 15, 1987. 63 years flashed before his eyes as he unveiled a 3-dimensional commemorative collage of his life story. Among the 100+ personal mementoes in the art was an exact duplicate of the 1926 Royal typewriter he used when starting his journalism career, with the first edition of USA TODAY coming out of the carriage. There was relief all around when his executive assistant heard “…WOW!!!” coming from his office. 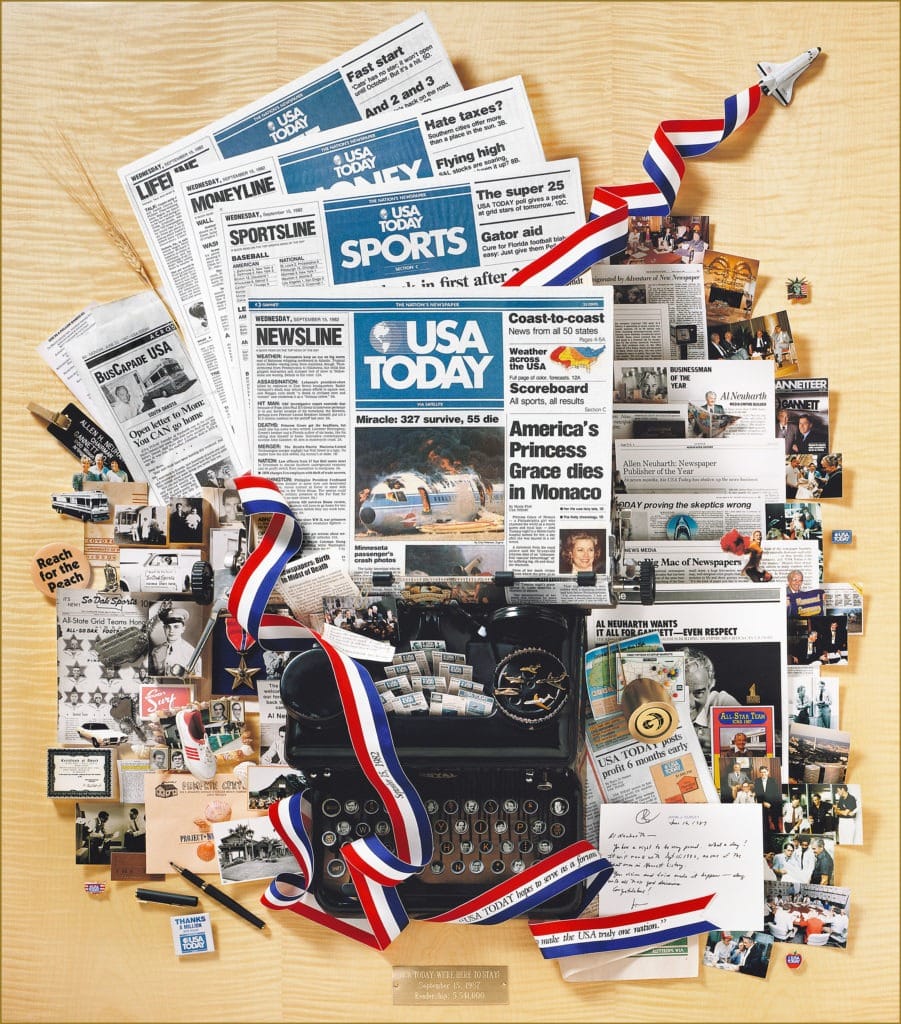 Excitement spilled into the following days when Neuharth met Lawrence and me at a USA TODAY gala on the national mall. His words made us sure we had something that was extraordinary and meaningful for other company celebrations—and that this was a concept that could actually work. The response was beyond anything we could have imagined. Al Neuharth inspired us to follow our dream; his enthusiastic note from 1987 is still a treasured part of the studio’s history.

Many years later we met Neuharth again in his office where his 3-dimensional art was still displayed. “My grandchildren will get a kick out of it,” he said as he revisited the contents—from his World War II dog tags, to the “Reach for the Peach” button, to faces of his key executives on the keys of the typewriter. It was an honor then and even more now to be a small part in creating an enduring legacy for this one-of-a-kind leader.

I am personally grateful as well for the new professional opportunities Al Neuharth provided at USA TODAY, where I was Director of Newsroom Administration. Mr. Neuharth championed executive responsibilities for women and minorities and expected superior performance.

Since Mr. Neuharth’s commemorative art, other amazing commissions have followed—for Jack Kemp, Oprah Winfrey, Michael Jordan, Jack Welch, and many more. However, Lawrence and I reflect with great appreciation on the collage that started it all and the leader it honored.