What Makes a Company Anniversary Memorable? The 5 P’s! 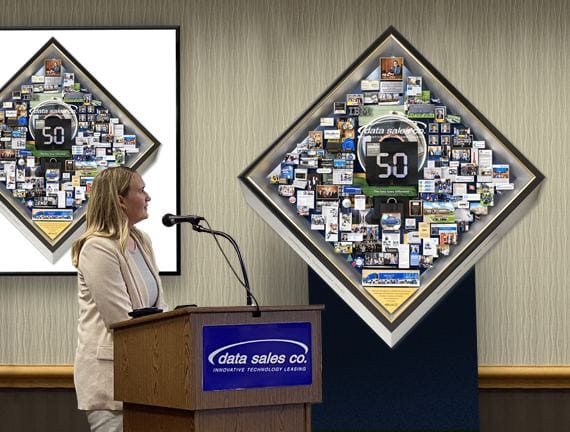 Your company’s anniversary is on the radar—but too far out to be concerned? Or it’s in 6 months? Suddenly you need to move ahead. Looking for anniversary ideas?

Whether for a corporate, hospital or association anniversary, there are “5 P’s” that can make your celebration a memorable success. After helping hundreds of organizations celebrate major milestones with One Of A Kind 3-dimensional commemorative art, we are always impressed by the same five best practices that maximize an anniversary’s success:

One Of A Kind personalized, custom-made art can help you achieve the 5 P’s by showcasing your history, leaders, mission and accomplishments in an extraordinary, meaningful way.  We transform your photos and memorabilia into museum-quality art to communicate your corporate story at your celebration, in your lobby, and digitally on your website. Our clients rave that their One Of A Kind 3D collage is the highlight of their celebration. Celebrate your past and present, and create a lasting legacy to be enjoyed for future generations! For free professional advice as you plan your anniversary, contact Donna Rome: 301.495.3361 x 102 or donna@oneofakindinc.com. We’ll send you an Anniversary Planning Guide along with brochures and examples.

This is one of the most fun, gratifying projects you’ll ever work on—and more so when it’s not a crisis situation. It takes time to go through boxes and drawers to discover archival material that give a celebration more meaning. It’s never too soon to begin planning for an anniversary, designating a leader, sending out a call for memorabilia and developing consensus on priorities.

For example: Two years before Andersen Windows’ 100th anniversary, their Director of Communications designated a Centennial Manager to oversee planning of the celebration. We visited Andersen’s Bayport, Minnesota headquarters for a tour of the operations with participation by key stakeholders, including the Chairman and 4th generation Sarah Andersen. Creating a strategy provided ample time to build consensus on what Andersen wished to communicate. We also had the opportunity to review and edit archives in several storage areas. 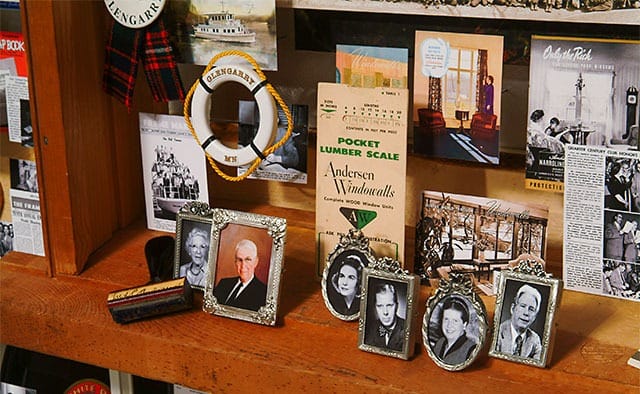 This brainstorming and on-site research was invaluable to appreciate their unique story and edit material. It also inspired Lawrence Romorini to feature the beauty of the St. Croix River, where Andersen has been located for a century. It reflects the company’s consistency, even as it evolved, and was essential in early years to transport logs for wood used in creating the windows. 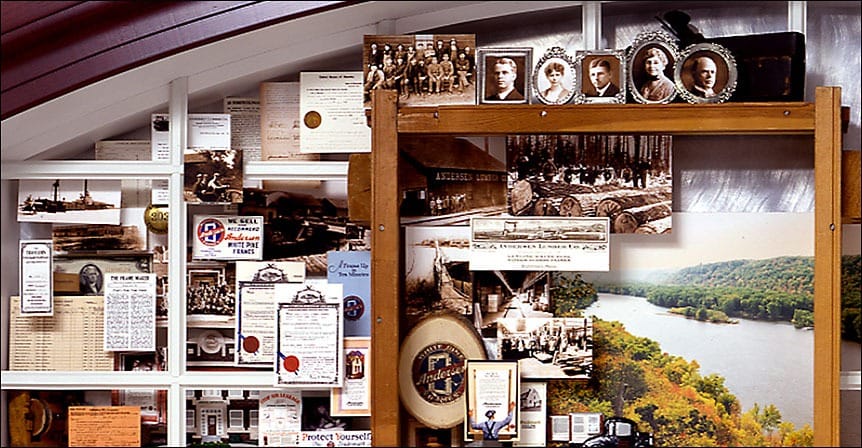 The overall structure was suggested by the Chairman:

“Could you possibly use a contemporary Andersen Window for the frame?”

When Lawrence found a pile of wood in the corner he asked, “What’s this?” As the original “10-Minute Window” that revolutionized the industry, it turned out to be a perfect 3D design element for the art. There’s a powerful juxtaposition between the 10-Minute Window and the latest Andersen Window. The luxury of time enables creative ideas such as this to emerge.

Andersen unveiled the art to launch their centennial celebration. Almost two decades later, the lobby art remains an overview of their story for corporate headquarter tours. 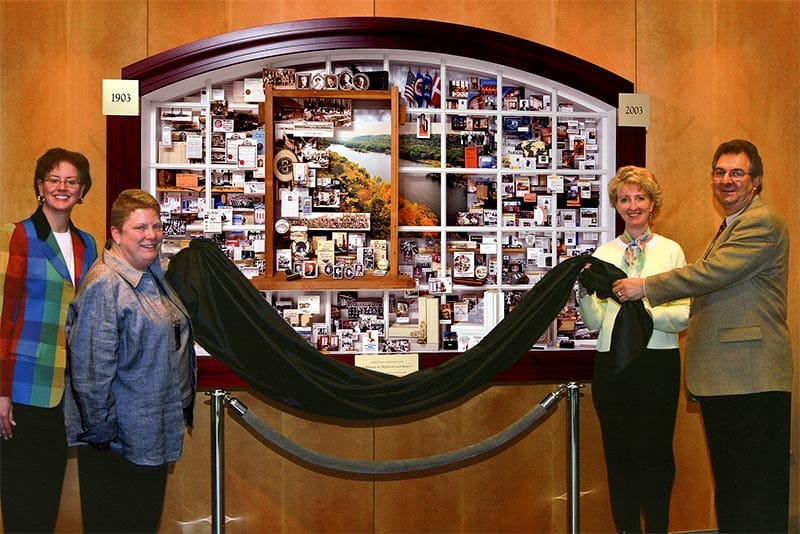 Andersen used their 100th anniversary art in other ways throughout their centennial year:
-Reproduced in 10,000 posters for all employees
-Sent as box-framed prints to display in all locations
-Featured in Andersen publications

Anniversary promotion can build anticipation for the celebration and underscore the significance of the occasion. Kennedy Health built momentum for their 50th anniversary with a “Call for Memorabilia” to contribute to their 3-dimensional anniversary art. The collage became a collaboration, with a payoff at the celebration when participants saw their vintage photos and memorabilia as part of their company’s artwork. An employee can proudly point out, “I contributed that!” 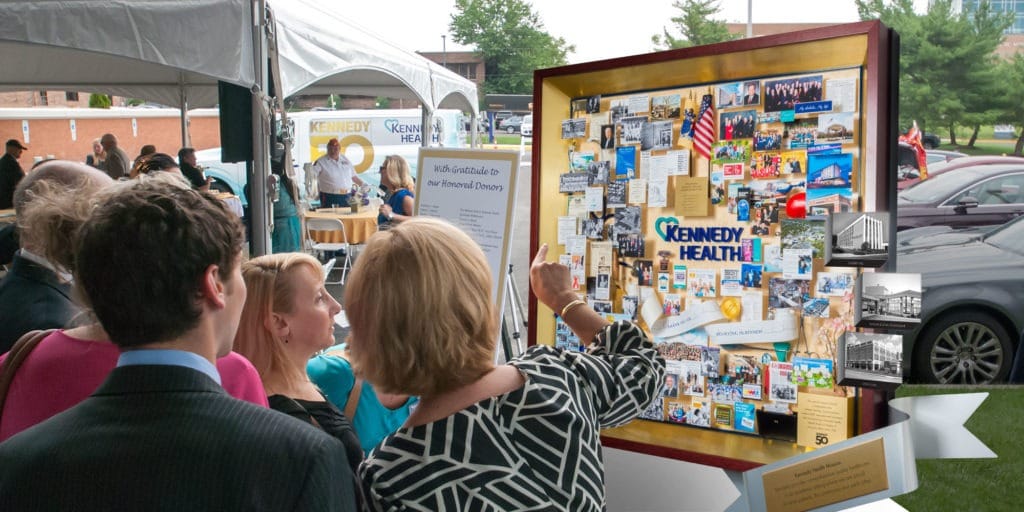 Be sure to contact local news outlets and trade publications to cover the importance of your organization’s anniversary to its community. Every anniversary ending in a zero or five is a significant one. The uniqueness of custom-made 3-dimensional art makes it a perfect photo opportunity with key leaders to accompany a press release. Leonard S. Fiore, Inc. shared their story with the community in a local newspaper featuring a photo of leaders standing next to the company’s anniversary art in an article. 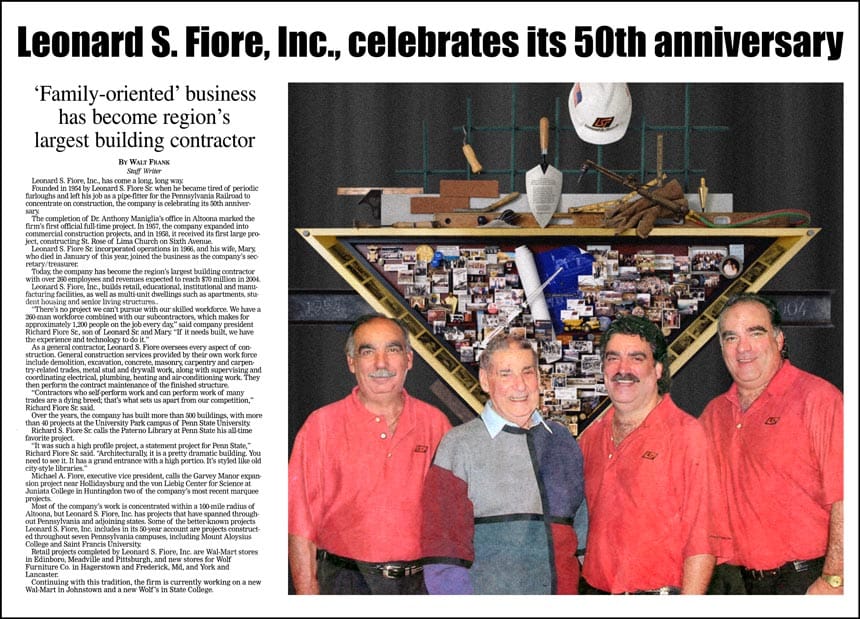 Your history reflects success, and the longevity builds trust with customers. Using your anniversary as a tool to reach out to your customers is a practical business anniversary idea that can strengthen your brand and the relationship. Make sure your website features the company anniversary and your story. Include anniversary collateral in your direct mail and social media campaigns.

“An anniversary is a good moment to recommit to what should never change,” Judith Rodin states in a 2012 Harvard Business Review article.  That is why our clients so often wish to feature values, mission and dynamic leadership in their 3-dimensional commemorative art. These important typographical messages are photoengraved in metal featured as cornerstones or as a border, surrounding photos, publications, and 3D items – they underscore the facets that distinguish an institution and should never change.

For example, Pacific Life’s 150th anniversary art continues to promote all that distinguishes the company in their lobby and in poster reproductions. Values are integrated into the border, while the cornerstones reflect mission and vision. 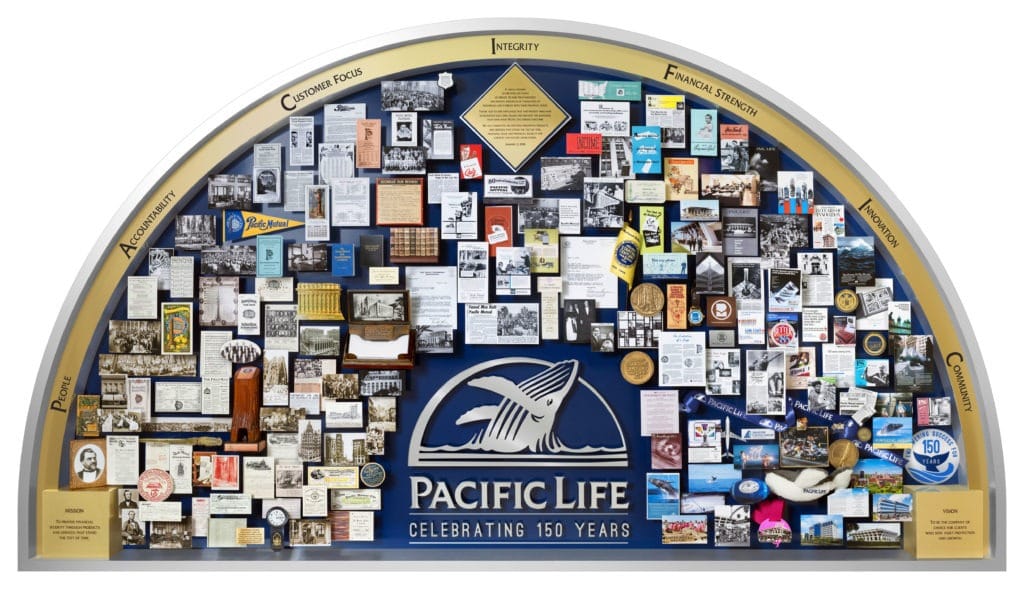 Our clients party in amazing, wonderful ways – from picnics on the premises with hot dogs, to galas at the Waldorf Astoria. The celebrations include employees, customers, longtime vendors, and community leaders. Often a month is selected for optimal weather, so the event – such as Lewis Gale Medical Center’s 100th – can be outside, offering more room and accommodating more people. Other times it is a yearlong anniversary party, with surprises for each month of the calendar.

For Sandy Spring Bank the autumn weather was perfect to unveil their 150th anniversary art at a Smokey Glen Farm picnic, attended by hundreds of employees, spouses and guests. The celebration continued at a formal country club anniversary event, where their art again reinforced the Bank’s history, leaders, accomplishments and vision for the future. At Sandy Spring Bank’s annual meeting, commemorative brochures featuring the art and a descriptive key provided a meaningful take-away to culminate the sesquicentennial. 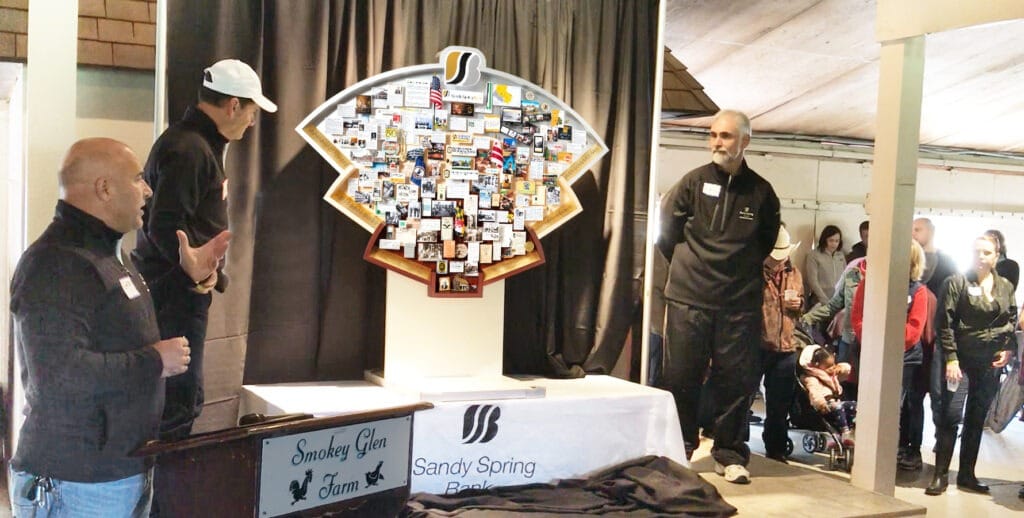 A donor reception can also highlight an anniversary celebration, especially for a hospital. Johns Hopkins University and Hospital honored key supporters to their endowment campaign with Donor Recognition Art. It celebrates Johns Hopkins’ unprecedented fundraising achievements while commemorating the synergy of the institutions since the founding. Names of donors are engraved in the metal border of the art, which was reproduced as framed posters. 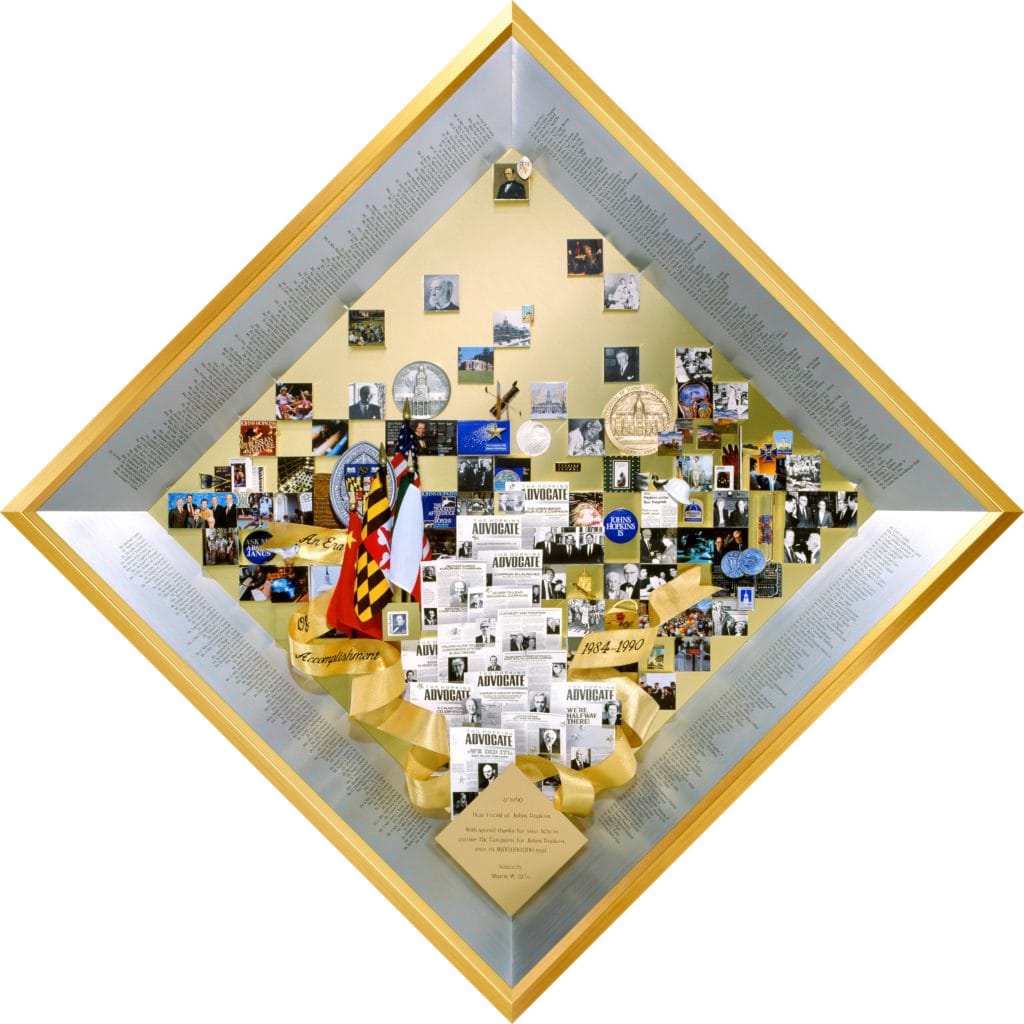 You can cast a broad net in expressing thanks to all who have contributed to your company’s success. Reach out to founders, founders’ families, longtime leaders and their families to recognize them at an anniversary celebration.

Our collaborators at Kennedy Health ensured that their 50th anniversary not only reflected the past, but also celebrated the current story. Founders, doctors, nurses, staff, and the community were all recognized for their role in Kennedy Health’s history, growth, expertise and accomplishments—creating a springboard to a dynamic future.

In addition, Kennedy Health seized the occasion to thank key donors in notecards that featured their 50th anniversary art, linking the donors directly to the hospital’s history and accomplishments. 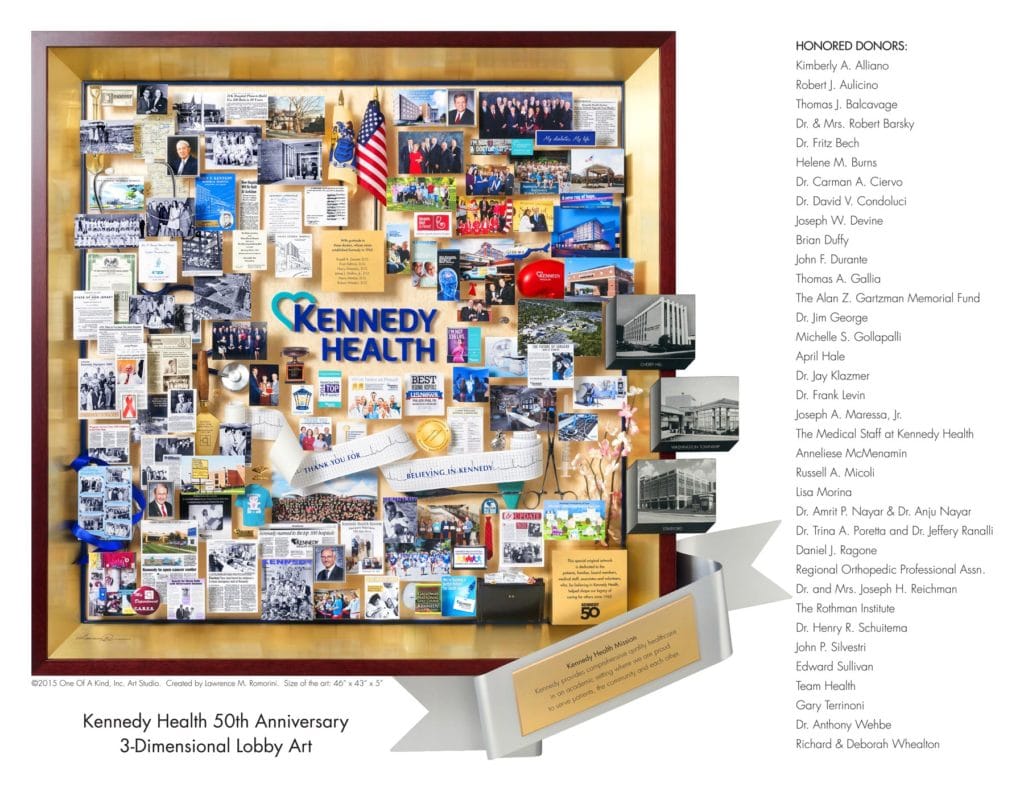 At the cutting edge of transportation planning since 1944, Lochner honored their history, accomplishments and visionary leaders in their 75th anniversary lobby art. On hand for the unveiling was Hal Lochner, the son of Founder Harry W. Lochner and the firm’s 2nd President. The art is a lasting communication piece on the firm’s website as an interactive feature with descriptive key. 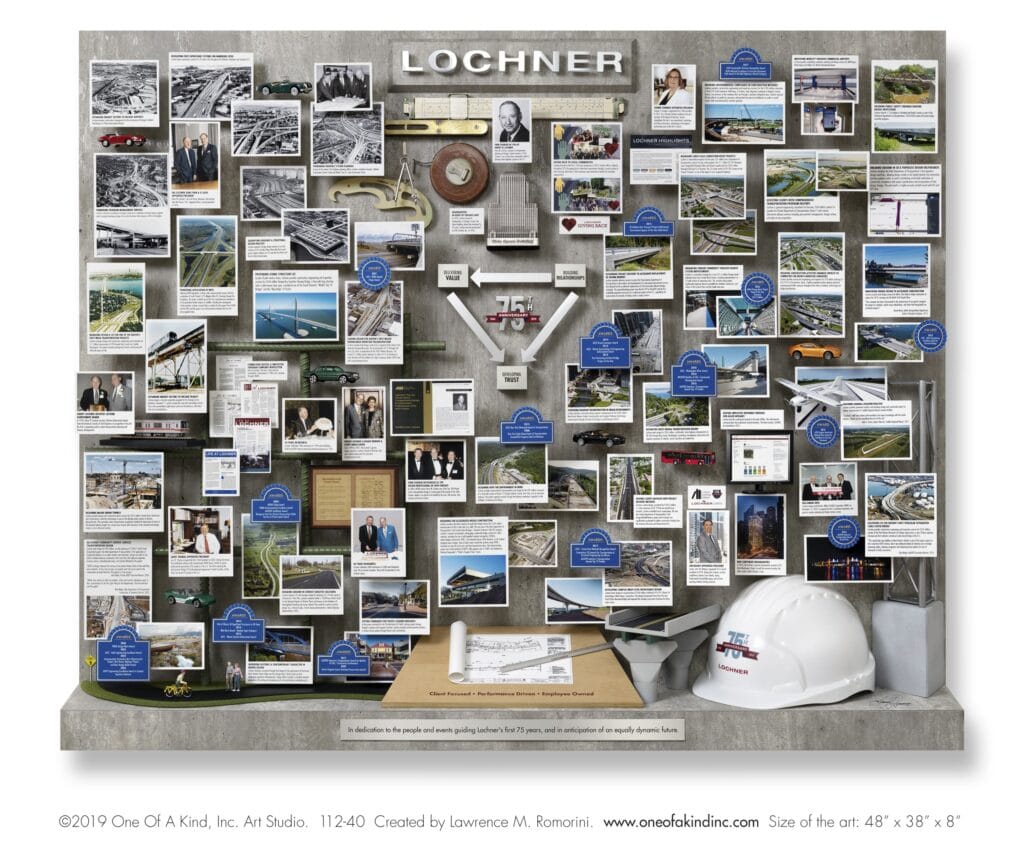 Reliable Automatic Sprinkler, a leading American manufacturer & distributor of fire protection equipment, collaborated with artist Lawrence Romorini to create commemorative 3-dimensional art for their 100th anniversary. A progression of four generations of Fee family leadership and an evolution of sprinklers brings the story current, where, at the base, an array of state-of-the art products take the company into the next century. An interactive website feature shares their 100-year story.

The company also honored the family leadership with contemporary, personalized awards. These custom awards are a great way to recognize distinguished leaders, and make for a perfect display in an office or home. 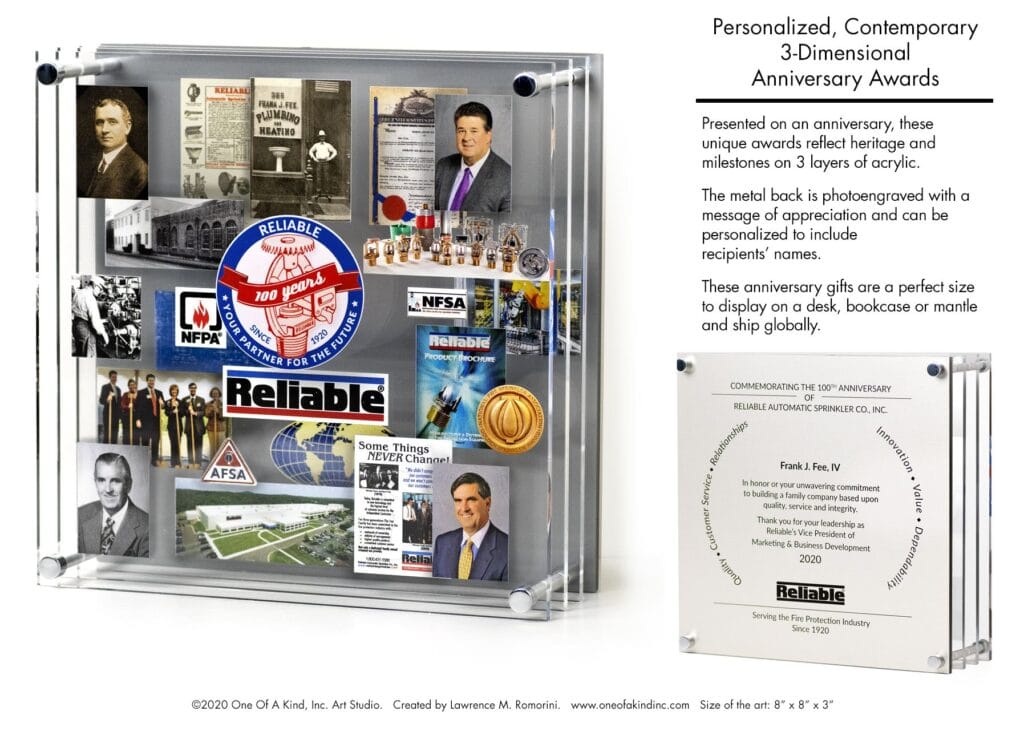 After the anniversary, leave a legacy that will be appreciated for years to come. With One Of A Kind 3-dimensional commemorative art, highlights of the archives can continue communicating your story and mission every day to staff and visitors in a fascinating lobby display. Organizing the archives for future generations is also a good start. To add to the archives, One Of A Kind provides all the images used in the art, scanned, retouched and ready for future reproductions.

Reproducing your anniversary art as a commemorative brochure with descriptive key and as an interactive website feature, you share your history, leaders and accomplishments far into the future. Years later, posters from Tech International, Marriott, St. Bernardine Medical Center, Boar’s Head, USA Today, Cisco Systems, Calvary Hospital and more are no doubt still on display. 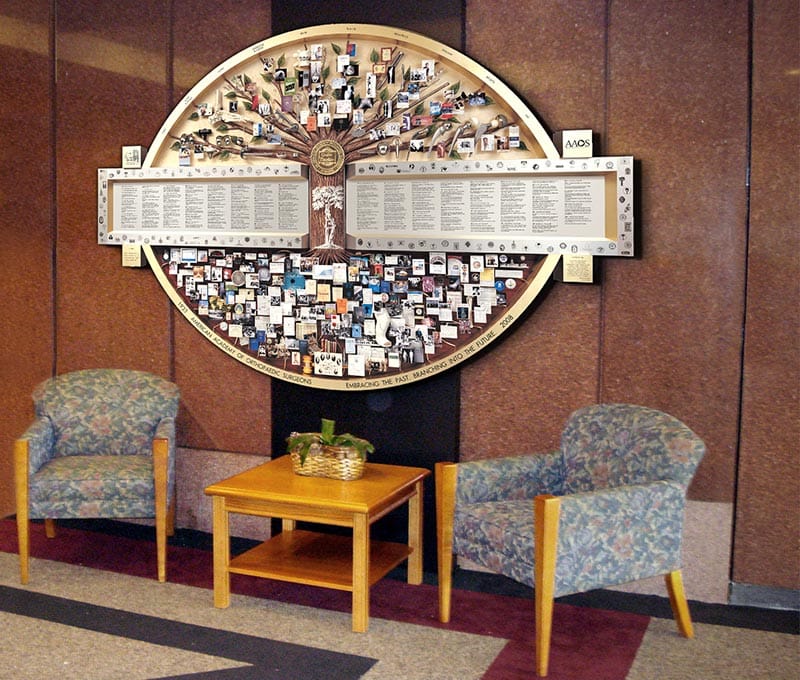 Some of our other past clients include Marriott, Andersen Windows, USA TODAY, Johns Hopkins, GEICO, Nike, ANSI, Cisco Systems, SHRM, and Chicago Bulls, among others. Their vision has resulted in amazing anniversary celebrations. But don’t just take our word for it, here’s what clients have said after revealing their One Of A Kind art:

“To say that what the company produced was in fact a ‘one of a kind’ is an understatement. A better description would be an ‘irreplaceable one of a kind’ because it truly reflected amazing memories that will now last a lifetime.” – CEO, eviCore healthcare

“The pictures through email do not do this justice and I can’t express to you how beautiful a piece this is…It is worthy of being in a museum.” – COO, ERMCO-eci

“I am awed, amazed and thrilled with the finished product. The artwork looks even better than I imagined. Photos really don’t do justice.” – CHRO, Willkie Farr & Gallagher LLP

“Pleased is an understatement. We are absolutely mesmerized by it.” – VP of Communications & Marketing, Texas Realtors

“Everyone was in awe over the artwork.” – Director of Operations, Student Programs, and Special Projects, NAESP

Milestone anniversaries are an exciting, unique opportunity. Would you like a free Anniversary Planning Guide along with free brochures and examples?

Rodin, Judith. “Anniversaries Are Not to Be Wasted.” Harvard Business Review, Nov. 2012, https://hbr.org/2012/11/anniversaries-are-not-to-be-wasted.