USA Rugby recently honored departing CEO Nigel Melville with One Of A Kind 3-dimensional art. Melville was at the helm of USA Rugby for 9-and-a-half years, the longest-tenured CEO in USA Rugby history. His leadership helped USA Rugby grow by leaps and bounds, culminating with both the Men’s and Women’s teams advancing to the Rio 2016 Olympic Games, the first Games to include Rugby in competition since 1924.

The retrospective art tells the story of Melville’s leadership by featuring miniaturized photos, news articles, and actual 3D items and memorabilia. It is constructed with a black lacquer base, red pinstripe fillet, and slanted inner sides made with blue lacquer. A custom silver-sculpted frame completes the visual and seals the art with a layer of clear Plexiglas, protecting the items underneath and creating the perfect visual time-capsule.

The centerpiece is a 3-dimensional rendering of the USA Rugby logo, mounted on “steps” of red, white and blue Plexiglas. The story flows around the logo, counterclockwise from the top left, and ends with a headline declaring “2016 Will Be A Big Year for USA Rubgy,” in the upper right corner. The headline is the perfect highlight to sum up Melville’s contributions to the sport. 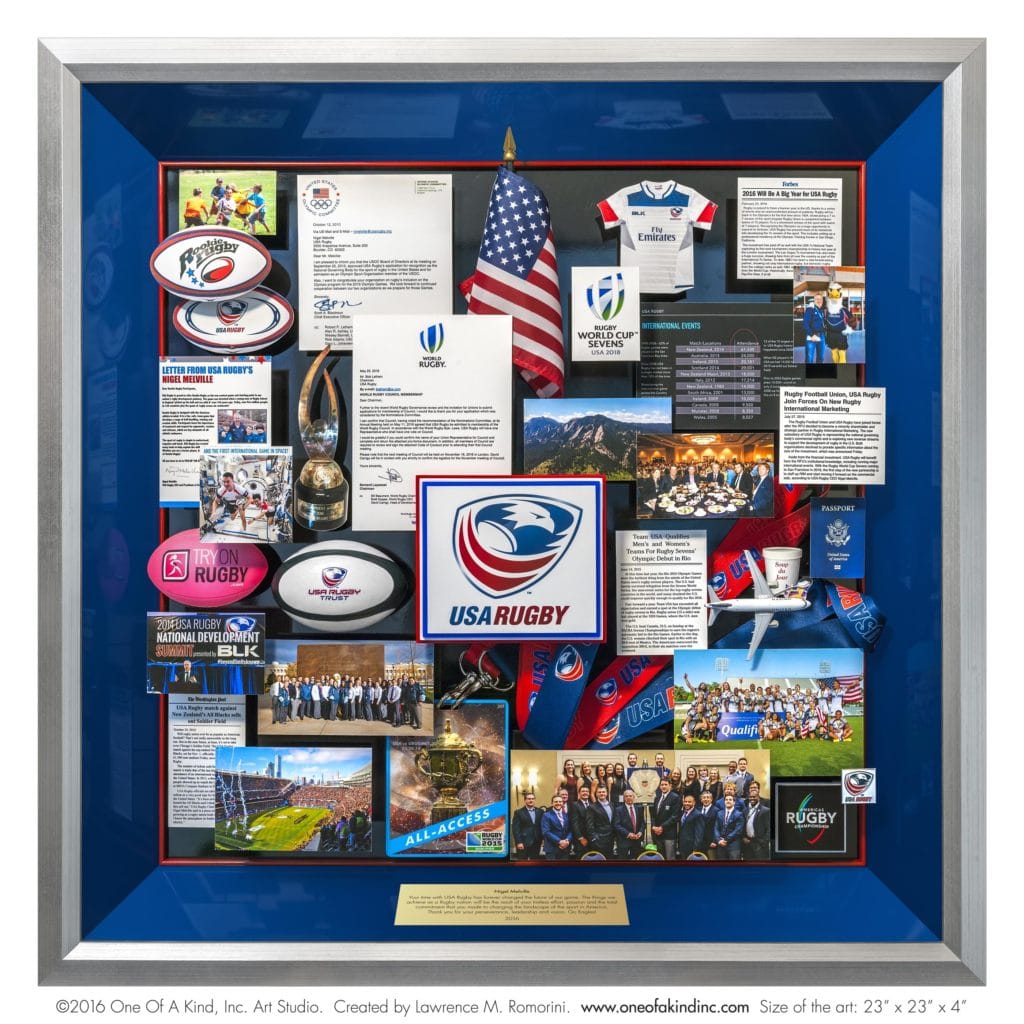 One special vignette features Rookie Rugby, an award-winning program created under Nigel Melville’s leadership that now has over 2 million participating boys and girls. The special “Rookie Rugby” ball featured in the upper left corner of the artwork serves as the focal point for this part of the USA Rugby story.

Another highlight reflected in photos is the amazing 2014 match between the New Zealand All Blacks and the USA Eagles. The event sold out the 61,500 seat Soldier Field in Chicago.

Perhaps the greatest event captured in the artwork is the Men’s and Women’s teams both qualifying for the Rio 2016 Olympic Games. They are featured together, celebrating their success, as they prepare for this first-in-a-lifetime event.

Nigel Melville
Your time with USA Rugby has forever changed the future of our game. The things we
achieve as a Rugby nation will be the result of your tireless efforts, passion and the total
commitment that you have made to changing the landscape of the sport in America.
Thank you for your perseverance, leadership and vision. Go Eagles!
2016 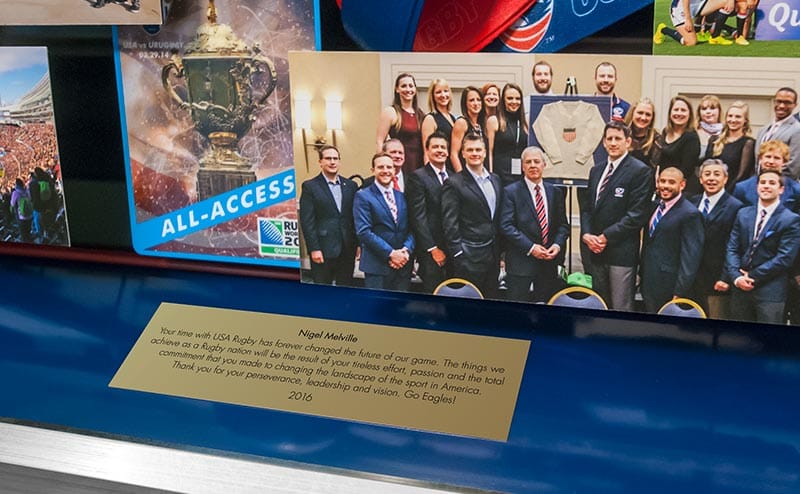 Nigel Melville became the youngest player to captain the England national rugby union team in 1984, and also played club rugby for Otley R.U.F.C., Wakefield RFC and Wasps FC. Upon retirement, he went into coaching for some years before moving to USA Rugby.

We send along our best wishes to Mr. Melville as he transitions to the Director of Professional Rugby at the Rugby Football Union in England. We hope his tribute will bring back favorite memories of his time in America. We also look forward to the continued growth of rugby in the U.S., with USA Rugby leading the charge!