Lawrence and I will never forget the excitement of the retirement party in Buffalo 25 years ago, when Jack Kemp unveiled his One Of A Kind commemorative art. And we are ever grateful to Sharon Zelaska, his Administrative Assistant, who organized the surprise tribute.  Sharon too recalls this special time:

END_OF_DOCUMENT_TOKEN_TO_BE_REPLACED

With Parents Day this weekend, our special guest post is by Mindi Brenner. We’ve had the privilege of commemorating the lives of both Mindi’s father and mother. It is our pleasure to share her wonderful Parents Day tribute and hear her speak about the two collages—her father’s just arrived in Nevada this week! END_OF_DOCUMENT_TOKEN_TO_BE_REPLACED

Congratulations to Western States Envelope & Label on your 105th anniversary! We hope you continue to enjoy your centennial lobby art. The design truly is One Of A Kind with its 3-dimensional envelope as centerpiece, from which your history flows, topped off by your iconic crown logo. The photos, catalogs, ads and 3-D you provided—an actual a die, a ruler and vintage swirl machine component—give the collage a fascinating texture. It was wonderful project collaborating with the “The Best Team in the Envelope and Label Business.” One Of A Kind wishes you continued you success as you grow and thrive in your second century. END_OF_DOCUMENT_TOKEN_TO_BE_REPLACED

The Battle of Gettysburg 150th Anniversary: A Tribute to the Daughters of Charity 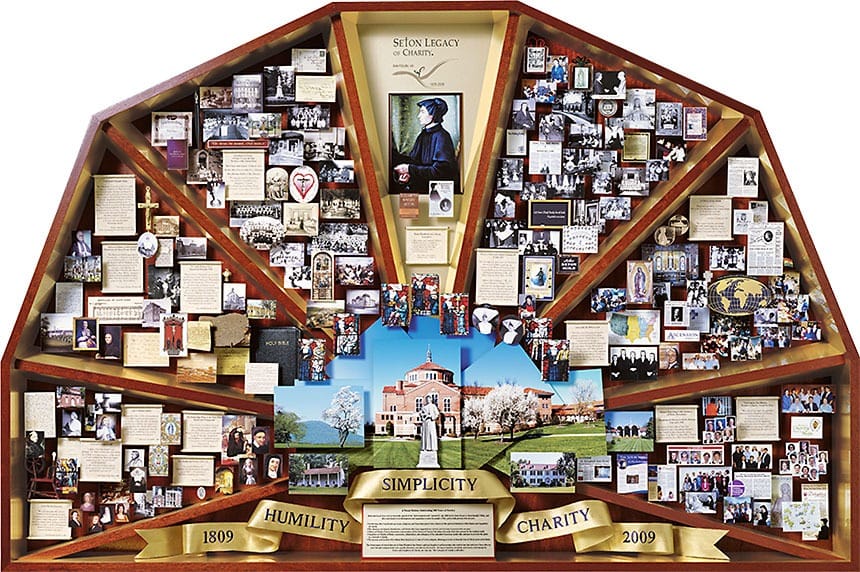 On the 150th anniversary of the Battle of Gettysburg, we remember with appreciation our previous client, The Daughters of Charity and their extraordinary service to our country during the American Civil War. We were fortunate enough to have the opportunity to work with the Daughters of Charity, located in Emmitsburg, Pennsylvania and founded by Saint Elizabeth Ann Seaton to commemorate their Bicentennial several years ago.  The sisters’ courage in helping the wounded on both sides throughout the Civil War, including the Battle of nearby Gettysburg, is a powerful, inspiring story indeed. END_OF_DOCUMENT_TOKEN_TO_BE_REPLACED